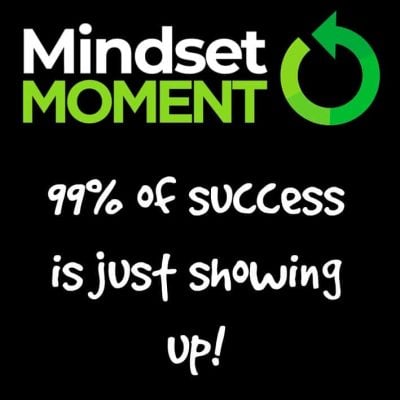 99% of success is just showing up!

So, you think successful people are all naturally gifted? You may just be surprised.

You know, in one way or another we carry the scars of our past and one of the scars that I carry is being an overweight child or simply a fat kid.

It’s amazing the terms that can be used to normalise a situation, he’s big boned, he’ll grow out of it, or the classic, it’s just baby fat, but when you’re 15 and nearly 6 feet tall that line starts to wear thin, pardon the pun. So, what does this have to do with the title of this blog? personally a lot.

We have all grown up making heroes out of successful people, sports stars, actors, celebrities or successful businesspeople, people we see at the top of their game, the cream of the crop.  And to make their celebrity appear even bigger we hear how they are described; she was a natural, he was a prodigy etc etc. Here’s something that may shock you it may not always be the case, especially if it’s reported in the media or the interweb.

I’m not sure how that belief affects our mindset, it possibly gives us an attitude of no point trying, I could never be as good as they are so why bother, wha wha wha, you know the story. But one thing I have realised it’s easy to play the victim card and not take responsibility for our actions and beliefs.

There is the old saying, before you judge someone walk a mile in their shoes, for some reason it seems more serious saying mile instead of kilometre, but its true.

What you need to do is use your feet on the brake pedals and apply pressure to either side to steer the aircraft, try getting that to my brain and through my muscle memory. Can you imagine my embarrassment thinking, how will I ever learn to fly if I can’t even keep the plane in a straight direction heading for the runway, it must have been hilarious to watch.

It wasn’t pretty as many including my long suffering instructor Phil would attest to, but every lesson I got better and better, did I think about throwing the towel in, hell yeh, I was 50 and felt so embarrassed especially watching 16 year olds making it look so easy so much quicker.

Whether you are learning to fly, play the guitar, dance, learning a new language or changing career, we can all find excuses as to why someone is better than us and reasons why we can’t do it, and more importantly don’t deserve it. Stop and realise they possibly are no more naturally talented than you are but they keep turning up and turning up.

I remember interviewing a band on my radio show whose debut album, remember those, black round thing, had just gone to number 1 on the charts and they said they were proud to be a ten year overnight success.

It’s hard enough to start learning something new, so why would you stop before reaching your goal.
99% of success is just showing up….. Simple!

How Can We Help You?